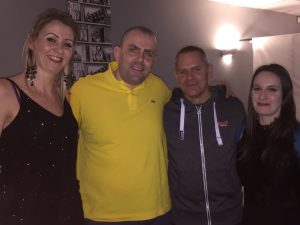 With just under 7 weeks to go it seems like a lifetime ago the four of us decided to embark on the biggest run of our lives!

Training has been going well for the most part, Chris and Sarah have been putting the miles in with run club on Tuesday nights and a cheeky 10 miles on a Thursday night.  Unfortunately at the moment Sarah has an injury so Chris has been running on his own (with some help from his iPod!).  It’s not until someone you run with gets an injury you realise how much you rely on each other for support, encouragement, moans and laughs!

Jim and myself have both been out of action for a few weeks due to illness and injury, prior to this we have been getting our miles in mostly during our lunch breaks but also with run club and the four of us have been doing our usual longer runs of a Sunday.  Fingers crossed we’re all nearly injury free and back to full health so it’ll be full steam ahead!

We have a couple of races coming up before the marathon, the Liverpool half marathon at the beginning of April and the Resolution Run at Delamere Forest this coming weekend.  Personally I am really looking forward to Delamere as the last run we did there was loads of fun and full of mud, mud and more mud! Although to save Jim’s ears I’ll try not to squeal the whole way round this time!

On 3rd March we held a race night to raise money for the charity we are running for, which is Action Medical Research.  The night was an incredible success. We had races, a raffle, an auction, food, a disco, and endless amounts of fun and laughs (with maybe a little drink or two thrown in for good measure!).  We raised an absolutely amazing amount of over £2,000!!  This really shows the generosity of our local community.  We are all incredibly humbled by the people who donated raffle prizes, gave us items to auction, sponsored races and by those who attended on the night, we really can’t thank them enough.

So, it’s onwards and upwards with the training and the fundraising.  We’ll be fundraising on a stall at the Easter event held by Friends of Moorside Park on Saturday 8th April so come and say hello!

(Elizabeth on behalf of Moorside4Action)