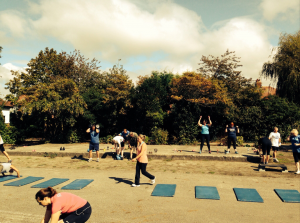 “I’ll be good from now on!”  He begs as dusty trainers are laced-up by his eight year old son.

The echoes of his pathetic plea could be heard by anyone who happened to be passing a certain house on Endbutt Lane, one foggy morning in February. In fact, if they looked closely they might have seen his hands and feet being prised from the doorway to which he gripped so firmly, before he was tumbled into the car and driven to an unknown fate.

Arriving into Moorside Park for his first community fitness session, this pot-bellied husband and father of one, was to say the least, a little reluctant. His wife was fit, his son was fitter…he was not!

The park seemed better cared-for that he had imagined and he had to admit that it was good to be outside – even if the weather wasn’t exactly tropical. However, as he moved past the edge of the dense, tall hedges that surrounded the bowling green he gasped as he saw items, which he thought he recognised from the films of Vincent Price, laid out in a circular fashion on the grass. It took all his will-power and the grip of death with which his wife held his hand, to prevent him bolting back to the armchair which was surely wondering where he was.

Tearing his eyes away from the rope, weights, kettlebells, mats, steps, boxing gloves, poles and a very strange contraption which resembled a sledge without snow, he saw a group of other victims waiting to begin.

There were no six-packs or aspiring gymnasts, in fact ages ranged from the young to the decidedly doddery, Men and women, boys and girls were chatting away and didn’t appear to share his trepidation for what lay ahead. They seemed friendly and remarkably normal – except for the fact they were here!

Then, a man in black with Popeye biceps, appeared from behind a van which was curiously parked on the path. Immediately the words he dreaded filled the air… ‘Okay everyone, let’s begin our run.’

Running was not his forte. Unpleasant memories of the school cross country flooded back but, swinging heavy legs into gear he joined the pack and went three times around the coned-out circuit.

It didn’t, kill him in fact he was pleased with his achievement. ‘Well that wasn’t too bad,’ he thought as he began to walk back to the car and that chair. Then he remembered the instruments of torture. He hadn’t finished, in fact he had just begun!

An hour later, and with whole series of exercises designed for the legs, arms, shoulders, back, stomach and something called ‘the core’ completed, a strange sense of euphoria  came across our hero. He felt good!

Was it hard? Yes.

Was it impossibly difficult? No.

Was it worth it? Definitely!

‘Bring it on, bring it all on!’ He inwardly screamed, ‘Watch out Statham, Depp and Cruise – there’s a new man in town!’

To his surprise, far from hating being outside and exposed to inclement weather – he found that he much preferred it to the grunting and groaning sterility of a local gym. This was alright!

For the rest of the day, he felt physically and mentally alive but by the next week his enthusiasm had dwindled and again it took some strong persuasion from his family to return to Moorside Park. But he did.

Week after week, Saturday after Saturday, he went, he joined in, and he got better and better. Was he really getting into it?

Well now, when that same man goes on holiday, or is away with work, and unable to attend a class, he remembers what he has learned and does his own class wherever he is – often to the surprise of onlookers!

What’s more he enjoys it for being a truly family event – something that Dad, Mum and Child can do and enjoy together. The family has even made some new friends – something that was never expected but which has proved to be the most important outcome from the sessions. Yes there is a qualified personal trainer, yes we’re all getting fitter, but it’s all about the people who take part.

The Moorside community fitness sessions are an opportunity for ordinary people to come together with support, positivity and humour to do some exercise. Fitness is the pleasant by-product of an otherwise entertaining social occasion.

Led by Moorside Matadors, Louise and Jim Hicks, the sessions are part of a whole range of activities organised by the people for the people. I dare anyone to resist their enthusiasm for the park, the community and the people who use it!

And readers, if you are wondering, yes that pot-bellied husband and dad is me. And if you are still wondering, I now watch ‘Saturday Kitchen’ on catch-up!