Our group were invited t 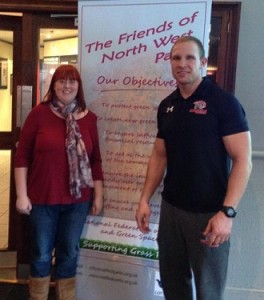 o the quarterly North West Parks Conference as a community case study in November. The conference focused on how parks can be used to improve health within the local community.Louise Hicks from Friends of Moorside Park and Daniel Palmer from Pioneer Fitness were invited to present a talk at the North West Parks Conference in Manchester. There was also presentations from Mersey ForrestDelegates from over 40 Park Friends and community groups across the North West heard how Pioneer Fitness has been running subsidised circuit training sessions in the park for the last seven months.The sessions have gone from strength to strength and, since being established, and feedback from participants has been amazing.Following on from the success in Moorside Park, the sessions have been rolled out in three other parks – Coronation Park in Crosby, Seafront Gardens in Waterloo and Derby Park in Bootle.

Moorside Park will also be starting a “Fitness in Teens” session and Tai Chi classes.

Daniel Palmer, of Pioneer Fitness, said: “The sessions encourage families to get outside in their local parks exercising together to create a healthier and happier community.”