We hold our weekly Run Club every Tuesday (meeting at 6:30 by the outdoor gym equipment). We initially started with just 2 Run Leaders but as our group has grown, 2 members of Run Club put themselves forward to become Run Leaders; Chris Beasley & Elizabeth Van Duyvenbode.

Chris is a participant at our Community Fitness Sessions and has been a member of Run Club since the group started over 12 months ago:
Paula and I have been members of the running club since it started, with me joining for two reasons. Firstly I wanted to get fitter and slimmer  and secondly I wanted to get involved in the local community. Having been somewhat of a nomad before moving to Crosby with Paula and the girls it has allowed me to cement my roots. The running club has allowed me to meet some fantastic people and build great friendships. 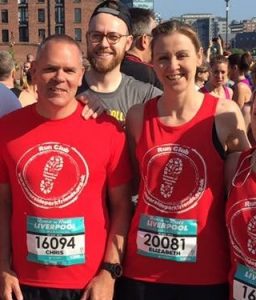 The natural step for me was to try and become a run leader as I wanted to give something back for all the support and encouragement I have been given by everyone in the club. Jim and Chris do a fantastic job and becoming a run leader will enable me to share some of their workload and will hopefully allow the running club to go from strength to strength.

Elizabeth will be the new ‘couch 2 5k’ Run Leader for Run Club. In the last few months she took part in her first EVER half marathons:
‘Ok so I won’t lie, one of the main reasons I joined run club was so I could see my best friend at least once a week!  She had told me about a run club she had joined in Crosby so I thought, I actually wouldn’t mind doing something like that! I had been doing some running (mostly by myself) and I wanted to challenge myself more & get fitter. Once I joined I absolutely loved it, even though my first outing with run club was in pretty awful weather conditions it didn’t put me off, it was like running had turned into something that wasn’t boring anymore & I liked that no one judged you for however slow or fast you ran or tried to push you too far either.  One year later & I’m still loving it!  Not just for having gone further distances than I ever thought my legs were capable of but also I have met and made friends with some lovely & amazing people.

I  decided I wanted to become a run lead so I could get more involved with the club & help out the current run leads Jim & Chris.  As anyone who knows me will tell you, I am the person who hides away in the corner, I’m not a leader by any stretch of the imagination but for some reason Moorside’s magic powers have got the better of me & I actually want to stand up & help people to do a bit more & run that bit further than they thought they could.  So here goes, this is a new thing for me, I’ll do my best & who knows, hopefully I won’t be totally awful at it!’