I can’t quite believe we are into February already! I had all of the best intentions of writing a blog for January to wish everyone all the best for 2016, but one thing led to another and here we are in February! So rather belatedly “Happy New Year to everyone”. Firstly I would like to thank all our supporters and volunteers for making 2015 such a fantastic year for the park and our group. We started our very own Run Club, the old tennis courts FINALLY got refurbished into an all-singing-all-dancing MUGA, we celebrated the 2nd anniversary of our circuits, held our first Pet Event, continued to hold our monthly gardening and litter-picking sessions, and held various family fun events throughout the year.
2016 promises to be even more exciting with SO much fantastic stuff planned………the first exciting thing we have planned is to coincide with Valentines Day we are launching our Love Moorside campaign. 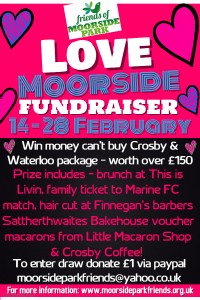 The campaign is about encouraging people to get more actively involved in improving the park – whether that is from attending one of our gardening or litter-picking sessions or one of our events/activities in the park. We also want to make our Facebook and Twitter accounts more interactive; so rather than it just being us telling people about what it is they “love about moorside park” and sharing their photographs and memories of the park.
Each month will have a different focus – so whether it’s about asking people to send in photographs of their pets, children, family and friend “loving moorside.” Or about letting people know how they can make a difference in the park – we would love (no pun intended) people to get involved.
This month we are focusing on fundraising to improve the park, and specifically raising funds towards one of our volunteer Run Leader’s (and my husband’s ) sponsorship efforts for the London Marathon! For those of you who don’t know (where have you been for the last 8 months), my husband has secured a charity place in the London Marathon and will be raising funds for our group. So while Jim has been out early nearly every Sunday morning with his Run Support Crew, I have been contacting various celebrities and local businesses for donations so we could do an online auction……..to be honest this seemed like the better option as this could all be done from the warmth of my bed with a cuppa while Jim, Sue, Elizabeth, Sarah & Chris all ran back to Crosby from Formby in gale force conditions!
As always, I have been blown away from the generosity of the local businesses who have got behind our efforts and donated items for our Ultimate Crosby & Waterloo Package. This includes vouchers for Satterthwaites Bakehouse, a brunch voucher from This Is Livin Bar and Grill, a family ticket to Marine F.C. and a hair cut from Finnegan’s barbers! As well as (in my opinion the best coffee around) Crosby Coffee, some delicious homemade jam from Caz’s Kitchen and a box of the legendary macarons from The Little Macaron Shop – thank you all SO much you are all AMAZING! To win this package – we are asking people to make a £1 donation to our fund via paypal () including their name and one lucky winner will win all of those prizes worth almost £150!! You have until Friday 26th February to make your donations, so get crack-a-lackin! 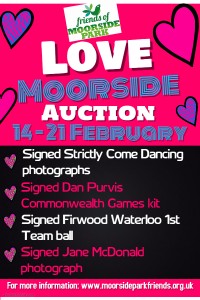 We also have an online auction (which will be listed on ebay 14th – 21st February) which included signed photographs from some of the Strictly Come Dancing pro-dancers (Robin Windsor, Janette Manrara and Aljaz Skorjanec). There is also a signed Jane McDonald photograph (yes the woman from Cruise Ship & Loose Women – there is a rather amusing story as to why we have this……and I know my friend Nic Cornish has got her eye on this item)! Firwood Waterloo 1st Team have donated a signed rugby ball. But my personal favourite item (and that is saying a lot given my crush/love/obsession with Robin & Aljaz) is our fantastic neighbour, supporter of our group and local olympian; Daniel Purvis who has donated a signed Commonwealth Games t-shirt. The auctions will be open from 14th – 21st February.

<Click here to open auction details in a new tab> 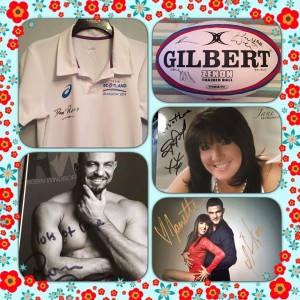 So PLEASE get bidding and donating, as not only is it for a great cause but it is also going to be an AMAZING effort from the hubby to run his first London Marathon!

I hope to see you all in the park