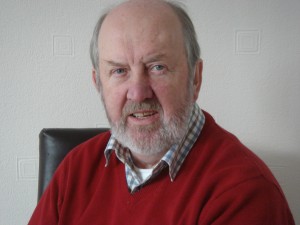 I have lived overlooking Moorside Park for over 60 years and a great deal of my childhood was spent playing in the park under the watchful eyes of the “Parkie” and the gardeners. When my two daughters were born, they also were taken into the park and then when we got a Labrador puppy this made me frequent the park at least three times a day to walk the dog and also socialise with other dog owners. Since those days the park and its management has changed considerably.

When the Friends were formed in February 2009 I volunteered to be on the committee and have since taken over the role of Treasurer. I enjoy gardening and have an allotment and take a pride in my own garden so I was particularly excited when the Friends Group were told by the Council that they could take over the maintenance of the Rose Garden Area three years ago. Since then, with a small and enthusiastic group of volunteers, we have dug, weeded, planted and pruned the rose beds and herbaceous border.

Being part of the Friends Group has been a very rewarding way to help improve and brighten up the park, meet other park users and put something back into the Community. It is also a fun way of spending a few hours in the fresh air and after all your hard work, see the rewards of your labour and get a “buzz” when someone compliments you on how nice the park in looking.

So come along and join in!!